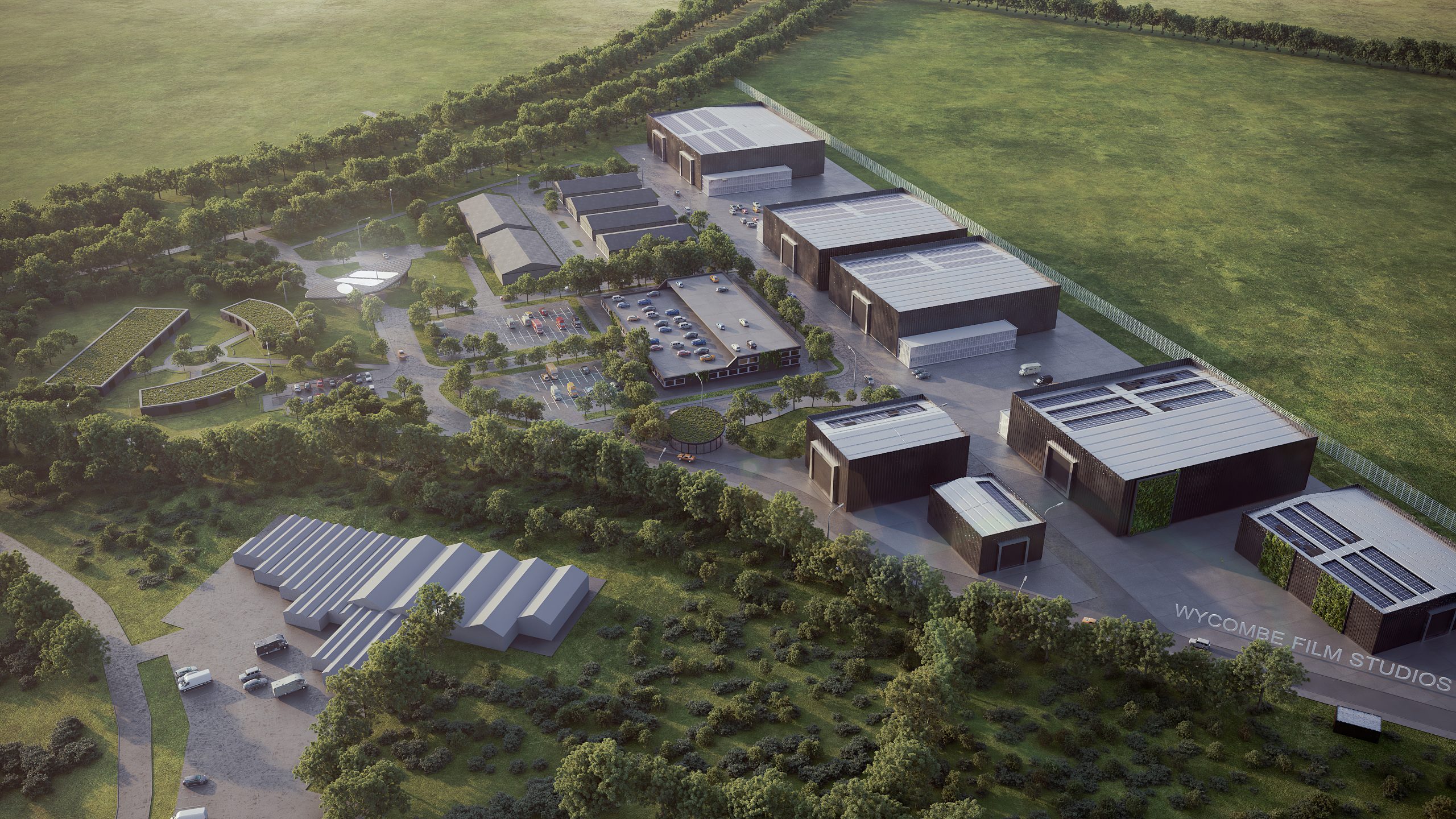 Stage Fifty has revealed its vision for Wycombe Film Studios, a new eight-stage boutique studio that will become home to the world’s top film and TV content makers.

Temporary planning applications have been submitted to Buckinghamshire Council to support a Hollywood feature film that will start shooting in 2022.

An application for a permanent studio will follow later this year, transforming a 26-acre site located just off the M40 to the southwest of High Wycombe into a class-leading sustainable film studio perfect for moviemakers and global streamers.

In 2019 the proposed site for Wycombe Film Studios was allocated as a strategic employment area in the Local Plan for Wycombe District, with the adjacent Air Park remaining in situ. The new studio supports Buckinghamshire Council’s objective of fostering economic growth by delivering multi-million-pound investment to the region and creating hundreds of exciting new jobs for the local community.

“After advising Stage Fifty on their acquisition of Winnersh Film Studios, I am delighted to be advising them again on Wycombe Film Studios.  There remains insatiable demand from producers for studio space for streaming content and blockbuster movies.  From a property perspective the sector remains in its infancy.  For me it’s exciting to be on board at this early stage.  It will be interesting to see how the sector progresses over the next few years.  I predict it will mature into a sub sector of the “alternative” property investment market initially by way of predominantly direct investment and in time indirect via dedicated creative arts funds. For now, though it is very much the operators such as Stage Fifty that hold the key to success in the sector. Without an experienced operator a studio cannot even get off the ground.”

“We’re excited to reveal our plans for Wycombe Film Studios. We’ve been working behind the scenes for two years to ensure we have everything in place to build a world-class film studio with all the elements for success.

“We’ve received temporary planning approval to build one stage and have submitted further applications for three more stages and workshops to support a major feature film that will start shooting this year. We’ll apply for full planning permission to create the long-term permanent studio in the coming months.

“Stage Fifty creates sustainable studios, and together with our partners, we’ve developed new technologies and innovative ways to build greener and more quickly than our competitors.

“This will be our third site in the UK. We’ve achieved great success with our other film studios in Farnborough and Winnersh, and we’re looking to continue this success in High Wycombe.

“Wycombe Film Studios will stimulate economic growth throughout the region, supporting around 600 temporary jobs during the construction phase alone.

“Once the studio is operational, it will create around 750 full-time direct jobs and support 450 indirect jobs in the supply chain.

“Ideal for independent productions and global franchises alike, the studio will establish High Wycombe as a destination for national and international film and high-end television projects, attracting the world’s most innovative content creators and inspiring a new generation of British filmmakers in the heart of Buckinghamshire.”

“The UK is enjoying an immense, once-in-a-generation production boom, generating billions of pounds for the UK economy and translating into thousands of new jobs across the country’s nations and regions. Indeed, the demand for filmed content is at an all-time high, which in turn is driving the need for additional studio and stage space. The development of new facilities, such as Wycombe Film Studios, in tandem with a focus on greater skills development, will further strengthen the UK’s position as a leading centre of film and high-end TV production in the world.”

Central to the plan for success is sustained investment in young people. Stage Fifty is launching an apprentice scheme to provide hands-on experience and training opportunities, supporting emerging filmmakers and developing the local skills base.

The sustainable studio’s impressive eco plans include solar roofs for clean energy and recycled soundproofing inside the stages.

The modular aluminium and steel structure ensures the stages are durable and robust. While the demountable design offers a more sustainable way to build as 90% of the construction materials are reusable.

Green spaces are maximised across the site, and vertical garden walls on the stages will help purify the air, providing a haven for local wildlife to flourish and improving the environment for everyone who works there.

A global boom in content production has exponentially increased the demand for high-quality sound stages. The UK is leading the way due to award-winning British talent and crew, with a recent report by the British Film Institute revealing a record £5.64 billion in film and high-end TV production spend in the UK in 2021.

A phased build is planned over the next 18 months, subject to planning. With the appetite for high-quality film and TV content greater than ever before, Wycombe Film Studios is looking forward to welcoming its first feature film later this year.